In this blog series, I will attempt to cover Azure Service Bus EventHub as a technology and how you can seamlessly integrate Event Hub with Microsoft Stream Analytics. We will then create an end to end Internet of Things (IoT) scenario leveraging these technologies.

Event Hub is a hyper scale stream ingestion entity in Azure Service Bus. It allows for multiple client to publish events that can be persisted within event hub as streams of data, these event can then be used by consumer technologies like Microsoft Stream Analytics to transform it into useful information.

The service bus team has already done an excellent job in creating a comprehensive EventHub developer guide, so we will skip the introduction of EventHub but rather focus on the design patterns and implementation of EventHub with Stream Analytics.

If you are looking into a deeper feature overview of EventHub I would highly recommend you to go through the developer guide first.

I will be covering the following in this multi-part blog series:

Cloud computing has changed the paradigm of building scalable applications. It has helped us to enable scenarios which were unrealistic in a privately owned data center.

The Internet of things is the next challenge for the cloud. Think of it this way, up till now cloud hosting providers were focused on scaling applications (of course there are many other benefits of cloud, but I focus on the “infinite” scale aspect for now). The uniqueness of scaling applications is that the demand of these applications on resources is intermittent. For example, a shopping portal can manage massive traffic by allocating more resources during peak hours and then minimizing during lean hours. This is the power and flexibility that the cloud presents us so we can operate in a cost effective way still maintaining customer expectations.

But, what is a lean scale scenario in case of Internet of things? Well, in most cases (especially Telemetry) there is none.

Think of a scenario – a vehicle designed to send telemetry data every 5 second will keep sending it unless it is interrupted because of a network or some other failure. This means that it does require a human to login into the Telematics Unit of the vehicle and the start the transfer of data, the vehicle may be transmitting all the time. It’s like a robot configured to send data without stop!

If you now extrapolate this scenario to a fleet of vehicles and now you have 1M devices sending continuous streams of data without interruption. So technically, the servers always need to respond to the requests to ensure adequate scale.

The above may not apply for all IoT scenarios, but this is a critical scenario for capturing telemetry data from the device. In most cases, the devices are flashed with firmware which has a connection module that reports consistent streams of data at frequent intervals.

So the question is, how do we effectively manage this humongous size?

You may say, add a pub sub messaging layer like a Topic or a Queue and that should take care of it, and it certainly will, however unless you have multiple Topics or Queue created, the pipeline will soon get saturated or require hyper scale at the consumer side to ensure you don’t reach the thresholds for these entities. This will also add more complexity on the development and cost of managing such systems.

Event hubs is targeted to solve such hyper scale IoT scenarios and is specifically targeted towards ingestion of data from several connected clients. Event hubs implements some interesting concepts to achieve this ridiculous scale, let’s look at some of these design principles:

Now that we have an understanding of the EventHub design principles, let’s start working on building our scenario. In the next section, we create a .NET based publisher and consumer for event hub to send and receive data.

In Part 2 of this blog series, we created an EventHub and a publisher to send Vehicle Stream data. We also created a consumer for testing our published messages. In this final post, we will look at Microsoft Stream Analytics and how it provide Out Of Box capabilities of processing EventHub data streams in real time.

Stream Analytics is Microsoft answer to real time event processing. It can be employed to enable Complex Event processing (CEP) scenarios (in combination with EventHubs) allowing multiple inputs to be processed in real time to generate meaningful analytics. Technologies like Esper and Apache Storm provide similar capabilities but with Stream Analytics you get an out of box integration with EventHub, SQL Databases, Storage, which make it very compelling for development in Microsoft Azure.

Moreover, it exposes a query processing language which is very similar to SQL 92 syntax, so the learning curve is minimal. In fact, once you have a job created, you can simply use the Azure Management portal to develop queries and run jobs eliminating the need to coding for most use cases. For more information on Stream Analytics refer here.

Let’s leverage Stream Analytics for the Event Hub scenario we development in the previous blog:

Stream Analytics is still in Preview so the first task is to enable it as a feature for your Azure Subscription.

For limitations of the preview release in creating job refer here.

To do this, login to your Azure subscription account administration. Select your subscription, then choose preview features, scroll down and Click “try it now” against the Stream Analytics option.

Once activated you should see a Stream Analytics extension in your management portal:

You can now start creating Stream Analytics jobs. A job in stream analytics allows you to define the inputs, query logic and outputs for a scenario.

In Part 1 of this multi-part series blog, we talked about EventHubs and the design patterns that enable it to perform at high throughputs. In this blog post we will create use EventHub for collecting data from a publisher, we will also create a Consumer that can receive the published events.

Our problem situation is a fictitious automotive company Contoso Motor Works (CMW). CMW has built their next generation Telemetry system to collect frequent data streams from the vehicles. The data will be used for performing preventive maintenance and near real time analytics for example to provide notifications to the driver in case the engine oil goes below the level. Contoso has chosen EventHub and Stream Analytics to achieve the anticipated scale for their North America vehicle rollout. 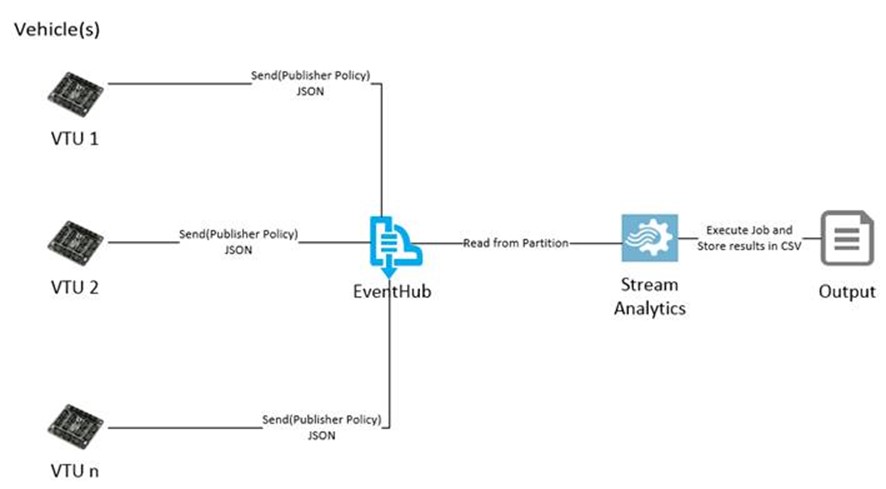 Note that since this is a simplified scenario we only output the results in a CSV. In a real world scenario, you can do more powerful stuff such push the results into another EventHub and have a Consumer that sends push notifications using Notification Hubs, etc. I will cover some of those in the next section of this series.

We need to represent Telemetry data from the Vehicle that will be sent as the Event datastream, the following represents a simplistic model for our fictitious scenario:

END_OF_DOCUMENT_TOKEN_TO_BE_REPLACED

I am a Software Architect working at Microsoft assisting our customers in designing and implementing production ready Cloud and IoT solutions.

All content provided on this blog is for informational purposes only. The opinions expressed in the blog are the owners personal thoughts and experiments and do not in any way associate with their employer or educational institution.
The owner of this blog makes no representations as to the accuracy or completeness of any information on this site or found by following any link on this site.
The owner of will not be liable for any errors or omissions in this information nor for the availability of this information. The owner will not be liable for any losses, injuries, or damages from the display or use of this information.